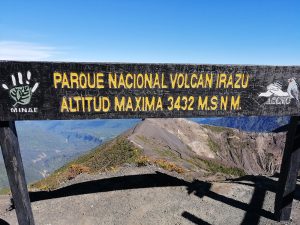 Visit with us the Irazu Volcano in a half-day tour from San Jose and learn about its natural history and eruptive cycles. On a clear day it is possible to see both oceans from its summit.

Irazu Volcano, still active, it erupted in 1963 leaving a lot of destruction behind, Irazu is the tallest volcano in Costa Rica. The landscape in the Irazu volcano is mainly montane forest and cloud forest, animals are difficult to see because of the constant volcanic activity, you get to see squirrels, owls, rabbits, coyotes and several species of birds including hummingbirds. In the volcano you can find several craters, two of them are the principal attraction, around the crater there is no much vegetation growing.

Explore Irazu volcano National Park as we make our way to the city of Cartago, you will have the chance to see all type of landscapes “agricultural fields”. The soil around the volcano is very fertile due volcanic eruptions. During the first part of the tour, you’ll ascend the side of the volcano, where you can see several craters, including the Turrialba volcano from a distance.
Afterwards, we will continue with a visit to the main crater which is home to a lagoon with emerald green color. It is important to mention, that on clear day you can actually see the atlantic and pacific oceans.

The tour continues to the city of Cartago, where you will stop to see La Basílica de nuestra señora de los Ángeles (Basilica of our lady of the Angels)-which is a famous peregrination site for many believers, many people travel days or weeks on foot, in a pilgrimage of faith.

Cartago, Costa Rica’s first capital, was founded in the Guarco valley in 1563 by Juan Vasquez de Coronado, it was Juan de Cavallón who made this land known when the spanish first came in 1561.

The construction of the temple began in 1912 and took between 12 and 14 years to complete. This church has a Roman, Arabic and Gothic style, the floors are Italian, also has 32 German stained glass windows made by Oitmanm Ars Vittrea and these have prints of the virgin, heart of Jesus and representation of the 15 stations of the holy cross. Its bells weighing 900 kilograms were brought from France and were made by Pacard in Annecy. The altar is shaped like a tower, made of wood and covered with gold and has a baroque style. Back to hotel.

Irazu Volcano National Park was created in 1955 and the origin of its name comes from an indian village that existed on the volcano called “Iztaru” meaning the mountain of tremor and thunder. The volcano erupted in 1963-1965, spewing ash, rocks, lapilli and fragments. A national emergency was declared due ash fall, through this period of activity rivers that have their source in the Irazu, turned into rivers of mud or into avalanches. During this catastrophe the Reventado river damaged 126.000 hectares of agriculture fields and cattle ranches, destroying more than 300 homes in Cartago.

“When the spanish undertook the conquest of Costa Rica, in the sixteenth century, as they approached the foothills of the Irazu they name it the “Valley of Desolation”, since the area was covered with ash and the trees were without foliage”.